When Monticello Banking Company first opened in 1895, we did our bookkeeping by hand. Our transportation to work was on horseback and no one had ever heard of air-conditioning. Today, over 125 years later, Monticello Banking Company has seen a lot of things come and go. We were one of the few banks in Kentucky that survived the great depression. Our banking standards reflect the quality and traditions of our founders. The same dedication to superior service that made us successful in 1895 is still with us today. No endorsement is stronger than a satisfied customer who returns to do business again. It's the ruler by which a business is measured and our long service record stands as a testimony of our ability to adapt and respond to the ever changing needs of this community.
Monticello Banking Company opened its doors on January 1, 1895 with $20,000 in capital. We had sixteen shareholders who purchased 200 shares of stock at $100 dollars per share. The bank's original stockholders were W.W. Jones, R.F. Paull, W.L. Baker, W.F. Rowe, Jos. Bertram, J. Berry, W.F. Fairchild, J.A. Jones, T.S. Lanier, Mrs. Sallie Sallee, J.B. Lanier, G.S. Dick, J.H. Shearer, J.L. Shadoen, Thos. Rankin and Arthur Rankin. The original bank directors were W.H. Jones, R.F. Paull, W.L. Baker, J.H. Shearer, Joshua Berry, T.S. Lanier and Joe Bertram. The bank operated with 2 employees and every bank transaction was posted manually. The bank was located on the corner of the Southeast side of Upper Main Street. That location is still a part of Monticello Banking Company. In the past several years, we have purchased additional buildings to accommodate our growth. We purchased the original bank property in 1898 from A. S. and Emma Cook. We leased and then purchased the Perk Denney Building adjacent to the original location in 1967; the Jenkins & Darwin building was leased in 1978 and purchased in 1982; and the Duncan Drug Store was purchased in 1983. Due to growth in the Monticello area, the Downtown Branch was purchased in 1977; the Tradeway Branch was leased in 1974 and purchased in 1991. Since its formation, Monticello Banking Company has had nine Presidents. Joshua Berry - 1894 to 1909, Joe Bertram -1909 to 1919, George M. Hedrick - 1919 to 1949, W. L. Baker - 1949 to 1954, C. B. Rankin - 1954 to 1957, Howard Hedrick - 1957 to 1970, Charles Stokes - 1970 to 1978, Dr. Mack Roberts -1978 to 2001, Mack Butler - 2001 to 2014 and Kenny Ramsey - 2014 to present. 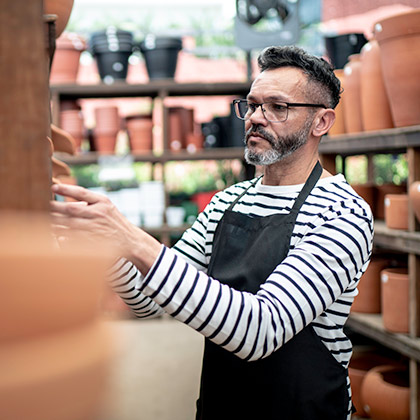 Business Lending with a Personal Touch

From lines of credit to real estate loans, we have what you need to make your business grow.
Business Loan Options
Read more on our accessibility statement